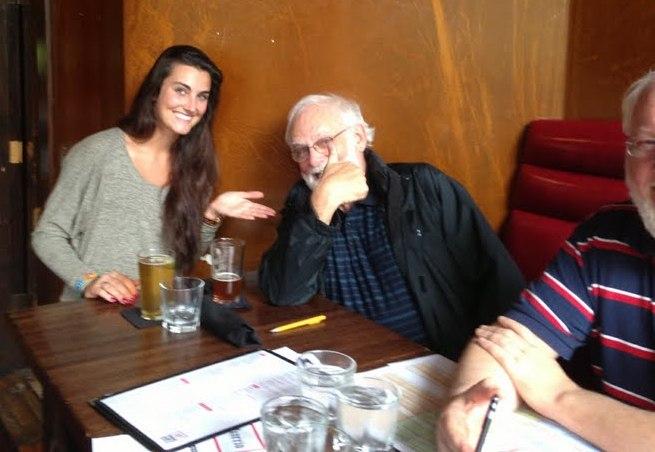 The Barrio Hostess Ashley and Her Selection of Sporadic Jack

Situation: The 2013 Ironhead Cup Draft was at Barrio in Lowertown, St. Paul at 4:30 PM this Friday (June 7th). Sporadic Jack and Scottish Rob are this year's captains based on the criteria set by Good Times Johnny (Greater than six feet tall, white hair, beard) so did the draft undoubtedly prove to be a battle of the minds?

And now the play-by-play of the battle actually begins.

In a brilliant move - Scottish Rob starts the mind games by going to the wrong bar for some drinks and a deep strategy session before the draft.  This "delay" tactic leaves Sporadic Jack sitting on a park bench across the street from Barrio looking closely like a pre-holiday Santa waiting for the bus. That is where I joined the draft fun.

Upon arriving in Barrio Sporadic Jack quickly uses his boyish charms to persuade a "Smokin Hot" hostess to be the "coin flip."  [Editor's Note:  WOFM Draft rules dictate that if the hostess is hot, she chooses who picks first.  If male or unattractive, the duties are given to the bartender.]

While waiting for Scottish Rob, Sporadic Jack shares the in-depth, bus stop derived, family first strategy with Undrafted Jeff and star witness to the draft - Weekend of Man Alumni Nerd.  This strategy consists of drafting lesser skilled players who have the ability to get into "the minds" of opponents.  He is not focused on low scores but rather on team chemistry and sabotage.

"Smokin Hot" hostess was a confirmed hottie and she did follow the protocol by awarding Champ McNairs and Sporadic Jack the first pick in the 2013 draft. She later shares privately she based her decision 100% on promptness (not on package size which Sporadic Jack may try to boost.)

On to the draft:

Sporadic Jack makes the first choice and goes for the lowest handicap - not family...interesting...

The Draft then predictively serpentines down "Low Handicap Lane" for the first 4 rounds.  No clear advantage is gained by either team.

In round 5 Sporadic Jack then activates the family-first strategy.  You can actually see and feel the battle heating up.  By all accounts this is where Scottish Rob's strategy started to come together.  You could actually hear the gun shot sounds as the captain of Team Champ McNairs begins shooting his own feet.  Notice the Long Duk Dong and Cinnamon choices. Slight advantage is given to Scottish Rob in the middle rounds.

The apogee of the draft happened in Round Ten when Scottish Rob proudly drafts Good Times Johnny for Team Omer Princes.  Since Good Times Johnny is not an official player in 2013, this causes quite the uproar.  Rules are reviewed, phone calls are being made, text messages are flying...not sure how this will resolve itself.  But this is very fun to watch as the captains continue battling it out for the 20th out of 24 draft spot.

A ruling from The Bobocracy was needed to resolve the situation.  Whoever drafts Double-Guns will get Good Times Johnny as a proxy for one round of golf - the ruling solves the issue for now and we continue on with the draft.

The draft finishes with no further tussles and a few more rounds of beer.