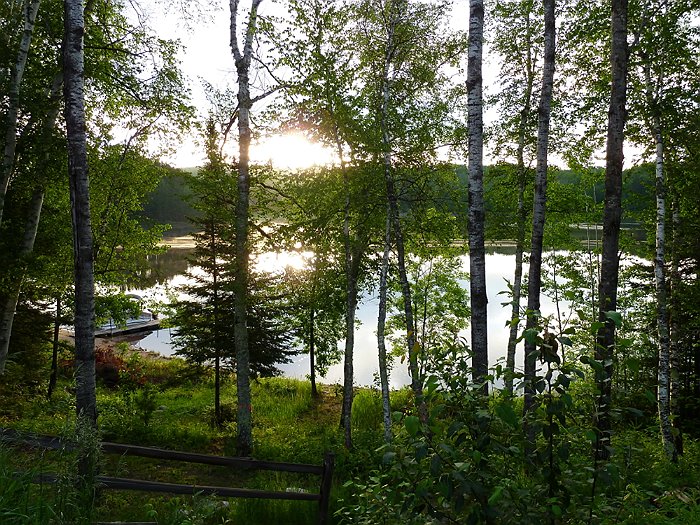 2010, known to the Alumni as The Weekend of Man MMX tested the fortitude of the mightiest of Men. Attendance again increase substantially, and again more and larger accommodations were necessary to hold the finest of Men in the most equisite of comforts. The test of wills was waged against a handful of mighty foes: Mother Nature, The Wizard, and Booze.

MMX started off amazingly.  It was the first year where the Weekend of Man brand directly benefited attendees.  A brewery donated a keg AND a case of beer.  Kent 45 The Six Shitter would transport this beer while carpooling North with Master Baiter Jason, Nerd, and The Bobocracy.  After arriving on the Iron Range it was determined that cold beer for that evening would be necessary so a trip to the nearest town began.  After having trouble locating a liquor store, Kent 45 The Six Shitter asked a local standing outside a questionable bar for directions.

"Oh no" was said simultaneously from Master Baiter Jason and Kent 45 The Six Shitter as the local announced they were hard of hearing and approached the vehicle slowly.  Transcribed below is the closest account of the directions he gave:

"You will want to go up until you see the next stop sign.  You'll go straight through that stop sign and you'll see an Ace Hardware on your right.  Just past the Ace Hardware is [unrecallable] street.  At that street you'll make a left turn.  Right after you turn, and keep your eyes open or you'll miss it, will be a liquor store."

The stop sign mentioned by the local is where Kent 45 The Six Shitter had stopped, and the Ace Hardware was no more than 100 yards ahead.  the liquor store was directly across the street from there.  "Half a block up on the left" would have sufficed.

While sitting in the cooler of the liquor store an argument errupted as to what kind of beer to buy.  After no agreement could be reached, The Bobocracy invoked Brotocol #3 and decided that a case of Blatz Light would be purchased in combination with a case of the cheapest beer they had.  This has now become standard procedure for all early arrivals.  After collecting beer, the Men headed to the lodge for food and drinks.  There they witnessed a bartender literally hump a cooler, shortly after she poured a free pitcher of beer.  Unfortunately, Mysterious Nick was not in attendance, and therefore unable to capitalize on the situation.

The pioneering Alumni were greeted the next morning to beautiful skies and warm sun.  As they were all awake early, they decided to head North to Lake Vermilion to go fishing.  After a brief run across the lake, several walleye were caught, the largest measuring 24 inches, which was boated by The Bobocracy.

They returned to Giants Ridge for lunch and headed to the golf course as other Men began to arrive. A fabulous round of golf was played on The Quarry, ending right as a brief thunderstorm came through.  Only a few minutes of rain gave way to wonderful summer evening with Good Times Johnny and The Bobocracy firing up the grills for The Opening Ceremonies.  The keg was tapped and the beer was enjoyed by many a Man while the food cooked.  Undrafted Jeff, in a moment of brilliance, added a number of hot peppers to the beer brat method now perfected by Good Times Johnny.  Most Men found this addition to be immensely enjoyable, however a small contingent of small town Men (the "Ketchup is Spicy" crowd) were extremely upset at the spicy food.  Their objections went unheard by The Chief Man.

While the first Day of Man provided the sun, warm temps, and large walleye, it was shortlived. Men awoke the next morning to an empty keg of beer, hangovers, and cold temperatures.  Men valiantly fought off their hangovers, mostly thanks to The Bacon Explosion, one of the most glorious foods known to Man.  Kent 45 The Six Shitter decided to take a different path, relying on a large amount of vitamins brought by Profound Schmitz.  Not trusting years of past hangover experience would haunt Kent 45 The Six Shitter for the rest of the day.

Good Times Johnny was unable to drive to Fortune Bay that morning as he was still much too drunk to operate a motor vehicle.  So was Undrafted Jeff.  The Bobocracy drove, while the other two, assisted by Master Baiter Jason, attempted to recall what exactly happened the night before.  It was deduced down to OH Billy, who shall forever be known as The Wizard, and high-end tequila.  The Wizard brought up a number of different tequilas, some ranging upwards of $300 per bottle.  As Men would walk by the elaborate display he constructed, he would ask "Do you like tequila?"  Regardless of the answer, he would say "Please, sit my friend."  Things got fuzzy after that.  His new nickname of The Wizard is well earned, because apparently he has the power to cast spells on Men's minds.

A brief stop for gas on the way would see more humorous events.  Sticking with the theme of the car conversation, Good Times Johnny approached a woman helping another customer with bait and inquired as to weather they sold capes and/or scepters.  She was confused and did not respond.

Arriving at Fortune Bay found that the weather was dreadfully cold and Lake Vermilion became a place even the strongest of Men feared. Pelting rain and strong winds turned back Scottish Rob and a crew of sailors only 300 yards onto the water.  The two boats of Men that went fishing attempted to brave the elements.  Kent 45 The Six Shitter captained his boat out to the far Eastern end of the lake consuming a five hour energy provided by Kahnke Kong, where all at once his hangover remedy fought back.  About 30 minutes after putting lines in the water, 12,000% (percent) of his daily vitamin B intake caught up with him and he started having anxiety attacks.  He and the three others in his boat immediately retreated back to Fortune Bay.

Meanwhile, about 1/2 mile away, still on the far side of the lake from the home harbor, Good Times Johhny, Undrafted Jeff, and The Bobocracy took shelter from the wind and waves by anchoring next to a cliff while Master Baiter Jason, Bitchfield, Kahnke Kong and Kent 45 The Six Shitter began their retreat. Unable to escape the rain and cold due to a vastly under-powered motor on their rental boat, their emotional and spiritual stability was tested when it was discovered that during this anchorage of unkown time, they would only rely on three canned beers.  For the second year in a row, they forgot the cooler of beer and were "loaned" three beers that were thrown into the lake from the other boat and carefully retrieved with a fishing net. After consuming the last of these beverages during a three hour battle against the elements, a small prayer was said, and the most brutal 30 minute boat ride one could conjure followed.  All parties survived.

After returning to Giants Ridge, the rain began to let up.  Kent 45 The Six Shitter attempted to sleep off his anxiety, but it was to no avail.  He and The Bobocracy ended up walking to the far end of the lake and fished from shore.  Slowly, after urinating neon green several times, he began to return to normal.  They walked back their villa and fished from the dock adjacent to it.  As they did, they saw The Wizard collecting firewood.  He didn't want to carry it all the way down to the lake, so he began throwing logs over his head to the fire pit.  Other Men were made aware of this when one log connected perfectly with a plastic chair, shattering it loudly.

Other Men decided to play Frisbee golf, hiking one of the largest courses in the United States.  The rain earlier in the day led to humid conditions and air thick with mosquitoes.  While enjoyable, this activity has not been duplicated to-date.

The last enemy to Men was the almighty beer. Good Times Johnny made arrangements with a nearby watering hole that provided a free shuttle to and from the bar.  Many hours were spent in this bar, with many Men consuming a drink known as Chuck Norris, another being offered shrooms (because he had a tye-died shirt on) which all led to several Men returning with tales of a creature outside the bar, later identified as the Sasquatch Midget, so called because it was a Midget of lore to those who did not bear it witness. London Pride, one of The Weekend of Man's European imports attempted to use international flair on the most attractive woman to appear. Upon making a joke, he would discover she had no teeth.

A fitting metaphor to end MMX:  Still smiling even with our teeth kicked in.


It's really nice to sit around this fire with all you g...Man, I played golf like shit today.