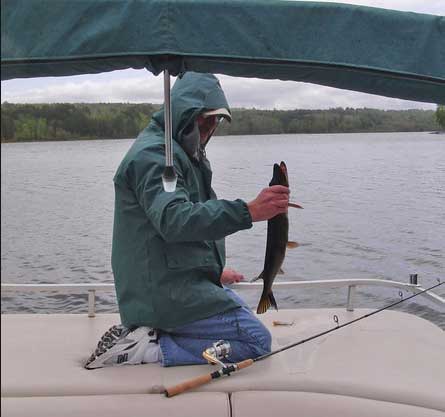 Men gathered in the North metro, much like the year prior, for a warm-up round on Sporadic Jack's home course in the morning, followed by a meal, carefully prepared by the Costco deli, at Sporadic Jack's house.  Feeling satisfied, Men began the adventure North.  Well, most Men.

A group led by Kent 45 The Six Shitter happened to make the entire drive up North directly under a cell of heavy rain.  In fact, it was the only area of heavy rain on radar, and followed them continuously as they headed directly North.  The rain was so heavy and loud that the radio was turned off.  Upon arriving at Giants Ridge, after three hours of water pounding on the vehicle's exterior, Kent 45 The Six Shitter didn't even park.  He pulled into the check-in area, got out, and went to the bar.  All accompanying men eagerly followed.

After the others arrived, Men retreated to their villa to enjoy some grilled food.  The Bobocracy had procured a wide selection of chops, burgers, and steaks from a reputable butcher in the Twin Cities.  It was then discovered that while the villas hosting Men were well equipped, they were not stocked with seasonings.  Hunger prevailed and Men perservered through un-seasoned meat.

The next morning was cold and wet.  Men teed off early and the weather deteriorated quickly.  After previously agreeing not to drink during the round, Kent 45 The Six Shitter and The Bobocracy made it to the third hole before ordering two beers.  Each.

The weather continued to be awful the entire day.  After hours of trying to get The Bobocracy to wake up from a nap, Dr. Chuck and Mr. Solheid finally did.  He then promptly passed out.

Everbody except Dr. Chuck and Mr. Solheid went to dinner at the Whistling Bird.  The waitress (best described as an ugly version of Roseanne Barr) encouraged Men to go to a gentlemen's club down the street called The Gladiator.  Men shuddered as she announced she worked there.

Neverless they went.  One-by-one, seven Men filed into The Gladiator, forming a line.  As the "talent" on stage picked up dollar bills like it was dirty laundry on the floor, Kent 45 The Six Shitter (the first Man in) looked down the line of other Men as he stood there with his arms crossed.  He said only one word:  "Nope."  Then walked out.  Everyone else followed.

The weather finally broke the following day and Men made an early start to Lake Vermilion.  Four Men went fishing and the other four went sailing.  The Men that sailed enjoyed some consistent winds across Big Bay while the Men fishing had good luck, landing several walleye, a northern pike, a smallmouth bass, and a crawfish.

An afternoon tee time on Fortune Bay followed with the clubhouse only a few hundred yards from the marina.  A very late twilight tee time meant the last few groups finished in darkness.  Pure fatigue after two days of weather and a late round of golf saw Men retire relatively early.

They awoke to bright sun the next morning and a wonderful round of golf at Giants Ridge.  After enjoying lunch on the clubhouse patio, Men packed up and returned home, ending the second Weekend of Man on a perfect note.