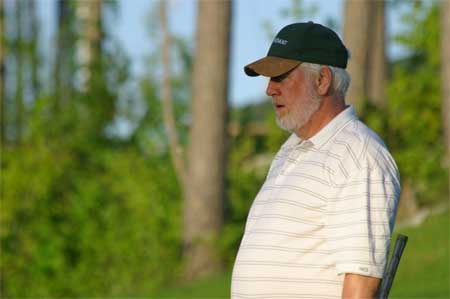 The Weekend of Man began on the Northern edge of the Twin Cities metro area with a warm-up round of golf at the home course of Sporadic Jack.  After being chased off the course by severe thunderstorms, Sporadic Jack, Scottish Rob, and The Bobocracy had dinner and then made their way North to the cabin of Good Times Johnny, about 70 miles West of Giants Ridge.  Arriving late in the evening, Johnny was ready with beer and whiskey, as any proper host should.

Dawn the next day brought about a picture-perfect summer morning with the sun shining brightly and Good Times Johnny cooking up locally made cottage bacon for breakfast sandwiches.  These sandwiches are still held in high regard.  The morning was spent taking care of a few non-recreation related chores.  Good Times Johnny had to take a truckload to the dump and seriously contemplated leaving the truck there, Sporadic Jack had to find nearby Internet access for a few hours of work, and Scottish Rob had to change a boat prop.  The Bobocracy supervised the prop change while drinking a beer.

Men made their way to Giants Ridge and teed off shortly after lunch.  Within a few holes all Men were in agreement with The Bobocracy that they were playing on one of the best golf courses the Midwest had to offer.  Customer satisfaction was un-scientifically measured at 100%.

Dinner that evening saw these Men to the Whistling Bird in Gilbert, MN. During one of the most amazing meals the World has seen, this small group of Men consisting of The Bobocracy, Bearded Jack, Good Times Johnny, and Scottish Rob drafted an unwritten declaration forming The Weekend of Man Alumni Association with the four of them christened as Founding Members, promising to return annually. And thus, The Weekend of Man was re-born.

The next morning sent Men venturing Eastward towards Giants Ridge to play the other course available to them.  At approximately 8:30 am on the third hole, Good Times Johnny and The Bobocracy managed to catch the beverage cart that was just begining its first rounds.  This chase interrupted Sporadic Jack's shot and he thought it unwarranted to be drinking beer at such an hour.  He sustained his own objection when Good Times Johnny informed him that it wasn't beer.  It was whiskey.

After finishing golf, Men made their way North to the shores of Lake Vermilion to rig and sail on Scottish Rob's boat.  As Scottish Rob launched his boat and motored around the far side of the marina, Good Times Johnny made a spectacular observation, yelling to Scottish Rob "You look like an Old Spice commercial!"  Scottish Rob didn't hear him, but two marina patrons on a nearby dock did, falling over laughing.  They relayed the message to Scottish Rob as he rounded the dock.  He didn't find it nearly as humorous.

Shortly after tying up while waiting for some lingering rain showers to pass a local Iron Range resident with the same model sailboat as Scottish Rob pulled into port on the next dock.  This stranger and Scottish Rob immediately struck up a dialog that neither could understand.  As Good Times Johnny and The Bobocracy sat in Scottish Rob's boat drinking beer, they were pressed into translating from Scottish accent to Iron Range accent, and vice-versa.  Aye, tis.  You betcha.

After the rain showers passed, Men set sail.  The wind died immediately thereafter.  Despite the lack of wind, the sails were kept up and the grilled was fired.  Men enjoyed beer, wine, Strongbow, and bratwurst.  Men watched the sun set over Lake Vermilion, capping a wonderful day and the first official Weekend of Man.


Good Times Johnny - Commentary on the appearance of Scottish Rob in his boat.