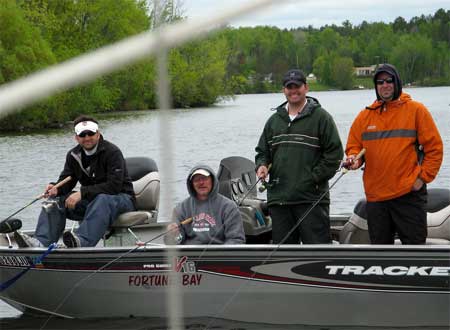 Good Times Johnny and The Bobocracy walk into a bar.

The plan was simple:  Load Good Times Johnny up with pain killers and keep him drunk the entire way with The Bobocracy acting as sober cab.  After getting two pitchers of beer and some ibuprofen in him with some icy-hot applied to his back, they began the second leg of their journey.  They made it slightly more than an hour before Good Times Johnny's buzz started to wear off so they pulled into the first roadside bar they found.  When they walked in, they had to turn the lights of the bar on where the verbal exchange above occured.  Despite the standoff-ish introduction, the bar owners turned out to be very nice and sympathetic to the back condition of Good Times Johnny.  After some good conversation, a few beers, and a shot of Canadian whiskey, Johnny was ready for the final leg of the journey.

About an hour later, driving through the darkness on a two lane highway, a car quickly approached from behind with an odd glow inside.  The Bobocracy and Good Times Johnny exchanged verbal barbs about the asshole tailgating them with the strange glow inside his vehicle.  Moments later the car would attempt to pass.  During the pass, The Bobocracy observed two things:  First, the strange glow was because the driver had a GPS unit AND a cellphone mounted and displaying.  Second, the driver was Sporadic Jack.

The three Men arrived at the cabin of Good Times Johnny and continued the back therapy.  Scottish Rob however would not make it.  He detoured MUCH farther North to Cook, MN, in order to take care of a legal matter involving property he owns on the Northeastern shores of Lake Vermilion.  Men would find out later that Scottish Rob didn't arrive in Cook until almost midnight and stayed in a hotel next to freight train tracks.  He barely slept.

While all this activity was going on, Good Times Johnny decided to treat himself to breakfast at The Wizards Bar & Grill in Nashwauk, MN.  Shortly after sitting down everybody in the bar started applauding.  What turned out to be genius in disguise, The Wizards offers free drinks to everyone in the bar if Plinko is played that morning on The Price is Right.  Good Times Johnny would go on to receive another free drink later that morning on a winning pull tab.  At least one Man was enjoying his morning.

At roughly noon that day, the Founding Members successfully rendezvoused at Giants Ridge.  They would make their way to the golf course and be met by all the other attending Men for that year.  Great weather provided a good round for all on The Quarry and afterwards Good Times Johnny and The Bobocracy grilled up brats and burgers for hungry Men, a weekend meal tradition now known as The Opening Ceremonies.

The next day was the coldest day on record in the history of The Weekend of Man.  A small group of Men decided the best way to stay warm would be to play 36 holes.  During their second round, it would begin snowing.

Three brave Men decided to go fishing.  The Men that decided to go fishing spent three hours in a 14 foot boat in brutally cold wind.  Despite fishing exclusively for walleye, only one walleye was caught.  After deciding that trying to catch fish was a failing endevour, they decided to throw anchor out of the wind and drink beer.  Master Baiter Jason earned his name that day, catching a Rock Bass that was easily a state record fish.  After consuming over 30 canned beers however, none of these Men were capable of realizing the meaning of this catch.  Good Times Johnny poured the rest of his beer into the fish and returned it violently into the wild.  Their fishing trip ended as the beverage cart for the adjacent golf cart went by.  The Bobocracy successfully ordered a gin and tonic from the boat, convincing the beverage cart girl to back down the boat ramp next to the dock.  This decision was almost instantly regretted.

Another group decided to stay inside and get drunk.  There are no verifiably accurate accounts of their afternoon.

Dinner that evening would be the last that Men would ever have at The Whistling Bird.  The owner's wife was fighting an illness that forced the closure of the restaurant.  The meal was satisfying and Men returned to Giants Ridge, settling in for the next day.  It was this evening where rookie Man Arctic Barker would commit what is quite possibly the worst offense that has happened to-date during The Weekend of Man.

At some time between 2:00 and 3:00 in the morning, there was a knock on the door.  Arctic Barker was bunking in a room closest to the door and woke up to answer it, thinking it must have been another Man that ended up locked out.  To his surprise, it would be a stranger, a man standing at the door wearing nothing but a towel wrapped around his waist.  This man informed Arctic Barker that he has a few women in his hot tub but was out of any form of alcohol and could desperately use our assistance.  He offered $20 for a case of beer.  Arctic Barker sold him the beer - AND BROUGHT HIM CHANGE.

The next morning it remained cold and cloudy, yet a few Men were quite heated upon hearing about the late night sale.  Brotocol #2 was immediately drafted and approved unanimously.

Later that morning, Rabbi and Undrafted Jeff (both rookies) decided to rent ATVs at the Minnesota Off-Highway Vehicle park.  Both returned to announce that this activity was quite possibly the most fun one could have with their pants on.  They then both removed their pants which were covered in iron-stained dirt.

The rest of the Men headed to Lake Vermilion to go fishing and sailing.  No fish were caught and even worse, one boat took both coolers of beer, leaving the other dry.  It was a short fishing trip.  Golf was played that afternoon in dry but cold conditions.  Despite this, Undrafted Jeff insisted on wearing shorts.

Men decided to warm up that night with a fire next to the lake.  The Six Hundred Dollar Man, the oldest Man in attendance, would not only marinate and grill steaks for dinner, but he would also out-drink and out-last all other Men that night, turning in sometime after 3:00 am. The next morning was brutally cold, yet Undrafted Jeff still wore shorts.  Immediately after the round, Men packed up and headed back to the Twin Cities, exhausted from the cold conditions of the entire weekend.


The Wizard - Casting a spell.