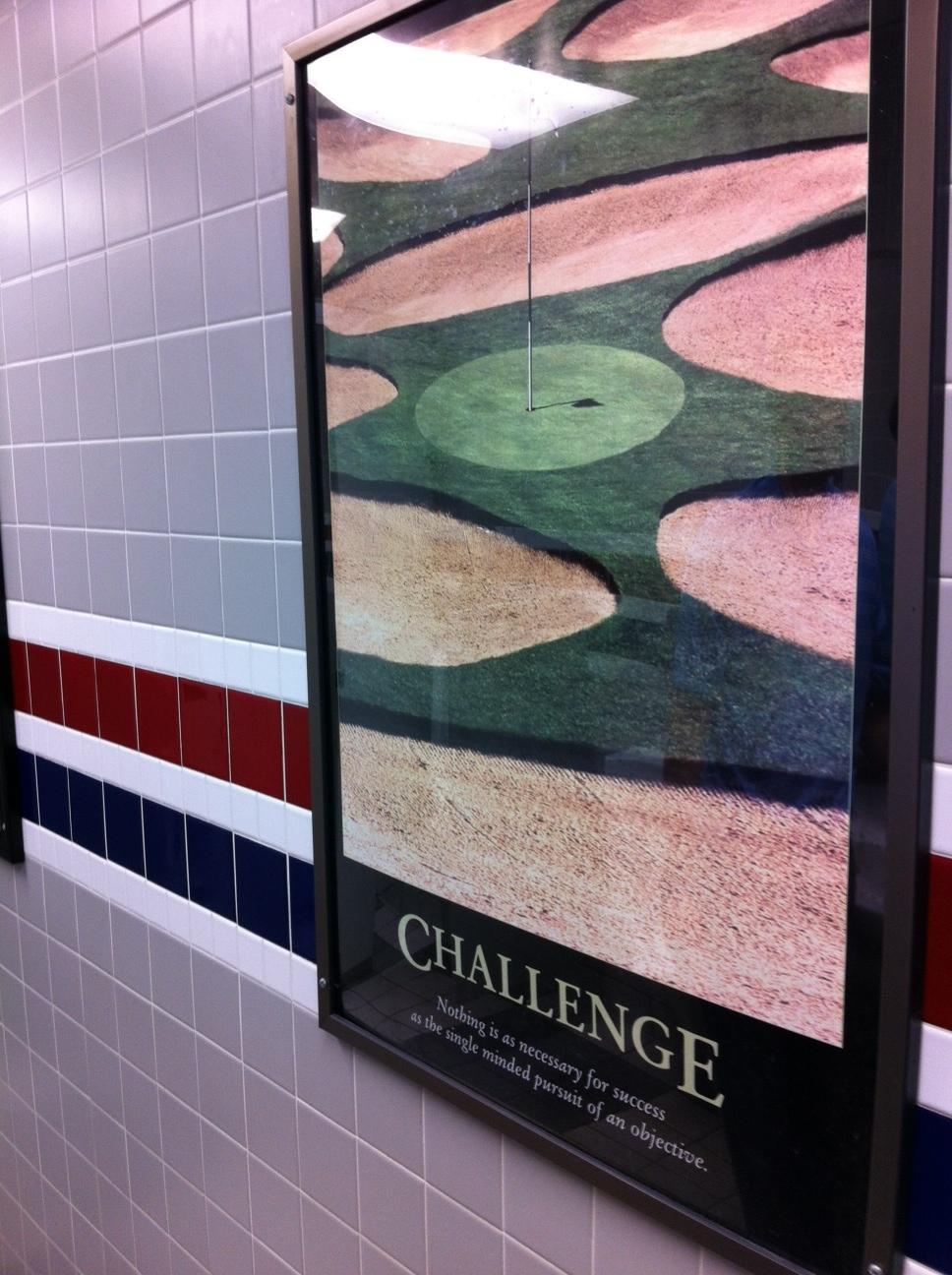 Murphy's Law:  What can go wrong will.

Twenty Thirteen:  Murphy was an optimist.

The seventh rendition of The Weekend of Man started with a small group of Pioneering Men under sunny blue skies in a brand new Chevrolet Tahoe XL rental (rented as to avoid the mental trauma served the prior year by Undrafted Jeff's Ford Fairlane.)  The first seventy miles breezed by uneventfully with little fanfare.  Upon reaching a point approximately one-third the way to the site of The Weekend of Man Twenty Thirteen, a pit stop was made where inside a gas station bathroom Men came upon the first ominous sign (pictured above) that would foretell of events future.

The first Unfortunate Event (heretofore known as a "Murphy") was on the way.  The journey North had an intermediate destination in Duluth, Minnesota.  Undrafted Jeff and The Bobocracy were chartered with negotiating the possible acquisition by The Weekend of Man of Minnesota's oldest micro brewery (Strictly following Brotocol #2).  Negotiations took a sudden turn south when the response was "Uhhhhhhhhhhhh......" after being asked to define their market(s) and the demographics of those market(s), and their strategy and tactics to target them effectively.  It was the first question.

After continuing their journey and rendezvousing with a handful of other Pioneering Men, the third annual Beer of the Pioneers, Red Dog, was selected and Men settled in for a comfortable evening.  Cinnamon! was allowed to legitimately smoke The Nordic.  Unlike year's past, a stunning sun would set and rise again the next morning over a calm lake with a calm wind.  The beauty of the weather, a traditional enemy of Man, lulled all into a sense of serenity and peace that would be shattered mere hours later.

The second Murphy began at the gas station.  After filling the rental truck and the gas tank for the boat, making tracks back to the accommodations hosting Men, the drive was interrupted by an incredibly strong smell of fuel a mere mile away.  It would be discovered in very short order that somehow, a steel gas tank for a boat motor had literally ruptured (on the bottom of course, because Murphy) and had sent fuel spilling out inside the truck.  A rubbermaid tote would become a temporary fuel container, which when later emptied was transparent.

A 34 mile round trip to the nearest vendor of a fuel tank, vent cap, and fuel hose began and ended quickly.  Upon transferring the fuel from the tote to the new gas tank, and after enduring several minutes of Undrafted Jeff whining about getting fuel on his hands, Men went to retrieve the boat from the dock next to the launching ramp.  Upon reaching the ramp they would discover the rental company (who put the boat in the water and tied it to the dock) did not insert the transom plug.  The boat had sunk.  Thrice Murphied.

After pulling the boat to shore with a lot of truck and a little bit of muscle (or vice-versa) and drying it, Men configured the vessel and set sail.  It was at this point in time that the motor, with fresh fuel and a new fuel tank, began running terribly rough.  It was decided they would use a small trolling motor for propulsion as a backup, and fishing commenced.  On the return journey to the dock, with only a few hundred yards behind them, the electric motor's battery died.  The Fourth Murphy saw grown Men paddling a fishing boat with two motors across a lake.

Friday, The Weekend of Man's second official day, again broke under stunning skies, warm temps, and calm winds.  After all that was endured the previous 24 hours, most Men thought Murphy was nothing but a distant image in the rear view mirror.  Their optimism was mis-placed.

The second 34 mile round trip began, this time to drop off the gas boat motor for repair.  The outbound leg of the trip went without fault or injury, however the inbound trip suffered a series of small set-backs.  The first was trying to get Billy Blaze an out-of-state fishing license from a small town gas station clerk that was a hipster.  The last part of the preceeding sentence is the most important.  While unconfirmed, after this 35 minute encounter, all present are moderately sure his name may have actually been Murphy.  (likely not.)

A slight detour to the grocery store followed.  Sporadic Jack was also celebrating his retirement from work, so a small contingent went to get him a cake.  After a brief dialog with a woman behind the bakery counter, she responded to an inquiry about cake design with "I can do anything you want.  a-n-y-t-h-i-n-g."  The tone and direct eye contact that served the response left all present speechless.  The cake was promptly paid for.

After returning with the cake and a valid fishing license for Billy Blaze, three Men set out fishing while the rest golfed at Fortune Bay.  The weather remained a postcard of a Minnesota summer, with warm temps and a light summer breeze.  While this fishing adventure was underway and while The Bobocracy had a walleye on his line, his phone rang.  It was the afformentioned brewery, the potential acquiree, calling to inform that an event they were to host that evening would not occur due to illness.  Murphy couldn't even let Men land a fish with enjoyment.

This sent Men on another 34 mile round trip to both retrieve the boat motor and find some other activity to supplement The Feast of Man that evening.  The boat motor was retrieved with the only issue being fouled spark plugs, however the shop left the motor running for several hours and managed to burn through all the gas.  Murphy!

Within an hour of the motor retrieval, Billy Blaze earned his nickname and served notice to Murphy.  Billy Blaze decided on an impromptu beer tasting and the nose of the Chevrolet Tahoe was pointed to the nearest liquor store.  Murphy was working behind the counter and was visually objectant to the Men.  Once it became obvious to the physical manifestation of Murphy that was employed at said liquor store as to the sheer quantity of purchase, Murphy, both physical and metaphorical, broke to the Will of Man.  Cold-shouldered service became "white glove", with Men gaining full access to the entire selection the store had to offer, including back-stock, while the staff eagerly loaded the Chevrolet.  Men would leave with almost 20 cases of beer, close to 100 pounds of ice, and, most importantly, the soul of Murphy.

The winning beer of this haphazard tasting was Samuel Adams Boston Lager, followed by Deschutes Mirror Pond, one vote shy.  Bringing in last place, with a single vote from Silent Lucidity, was Old English 800 Malt Liquor.  He was elated when the rest of the bottle was presented to him to finish.

The following day and one half went off without a hitch.  Men golfed, Men fished, Men threw a ridiculous amount of dice.  E. Pliddy, a New Yorker who had flown out for his rookie year, ended up with everyone's money in 6-5-4.  The Feast of Man saw some of the best steaks yet prepared, with a variety of dishes to provide a truly complementary meal.  The final round of the Ironhead Cup (summarized above) went smoothly, the evening was calm with a crackling lake-side fire where the Ironhead Cup was passed from Man to Man on the winning team.  Sunday, host of the send-off round, was another idyllic day.

Despite Murphy, Twenty Thirteen is looked back on fondly as a rousing success.

One last laugh was had by Murphy.  Undrafted Jeff and The Bobocracy had to endure the entire return trip in the Chevrolet Tahoe rental...Which two days earlier had a portion of the interior soaked in unleaded gasoline.  They spent the next four hours huffing distilates.

Challenge:  Nothing is as necessary for success as the single minded pursuit of an objective.


OK guys, this is going to work and it's going to be hilarious!