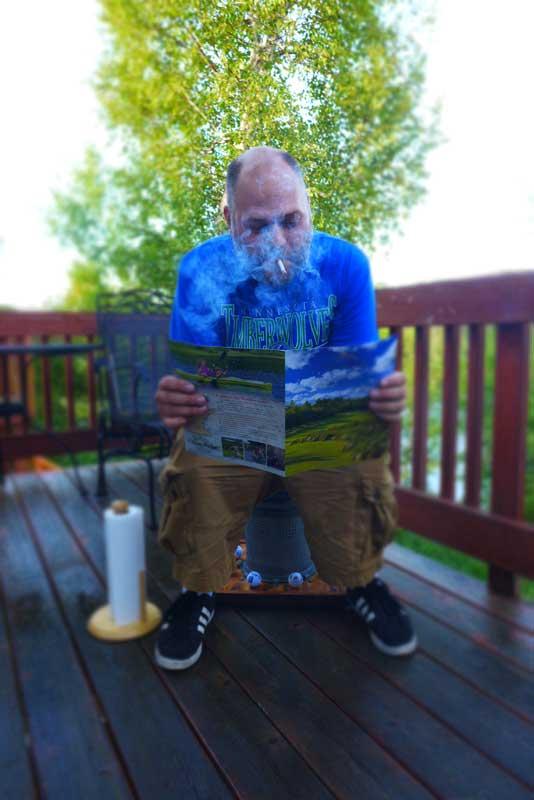 Triumph and/or victory comes in waves.  For years, The Weekend of Man has seemed to trade setbacks and success in somewhat alternating years.  Whether it be Mother Nature, mechanical failures, or the mixing of personalities, the good always seems to come with the bad.  Title IX, the 2015 version of The Weekend of Man, would break this alternating pattern by following up a successful 2014 (8) with another exemplary event.

The opening volley of successes started with an expansion of the 2014 road rules.  Taking a cue from Weekend of Man MMX and the agonizing drive Good Times Johnny took, three rules were drafted:

These rules were strictly adhered to, and upon arrival to The Weekend of Man, other Pioneering Men not in the vehicle that made this journey were regaled with tales of chicken from The Brass Rail in Cambridge, MN, lake-side beers at Zorbaz just outside of McGregor, MN, and dollar taps at The Wizards in Nashwauk, MN.  This journey, and the assembly of the Pioneering Men also took place two days prior to the official start of The Weekend of Man, affording a full day to prepare for the event.

The Pioneering Men arrived with the required case of Blatz Light and the cheapest beer sold in a 30 pack at Dinos.  Old Style would be the beer placed on offer for Title IX.  The ceremonial Smoking of the Pipes was complemented with some exquisite cigars.  Learning from one of the few mistakes of the prior year, a bottle of Great Odens Raven was not consumed.

The next morning broke under clear skies.  Macho Rod and Scottish Rob headed North early in the morning to play a round of golf at Fortune Bay and rig Mostly Harmless for sail on Lake Vermilion.  Photographic documentation and a lack of dialog shows these events to have gone off without incident.

Other Men, notably Sam Adequate, Undrafted Jeff, and The Bobocracy prepared the fleet of boats that would be used for fishing.  This prep work was uneventful, except for an unusual issue with the prop of the outboard motor, which would lead to several mechanical hypotheses.  Spark plugs would be changed, and the lower unit would be disassembled and re-lubed.  Several days later, Macho Rod would properly diagnose the issue within the first three minutes he was aboard the boat by noticing that at speed the transom was too deep and the prop wasn't getting the blades into enough water.  He was declared a genius.

After the boats were prepped, it was discovered that the typical location used to retrieve bait was completely sold out of everything.  This sent Men to an on-your-honor bait shop in the next nearest town, where the bait was found to be of superior selection and quality.  It is now the preferred location for live bait purchases required by The Weekend of Man.

Later that evening, Pioneering Men would make the first of two trips to The Whistling Bird for dinner.  Cinnamon! arrived in an Aladdin T-shirt (the animated Disney movie) and ordered a strawberry daiquiri.  Both of these actions resulted in repeated mocking.

The Ironhead Cup began the following day as the rest of the Title IX Alumni arrived.  Alumni were presented a goodie bag of Nike golf apparel and custom-made bottle openers and custom engraved Yeti can coolers.  The Bobocracy and the Ginger 1200s took on Macho Rod and the Ringo Stockdales in a captain battle of the only Founding Members to not have captained a team.  The end result was a wire-to-wire victory for the Ringo Stockdales, going up a single point on the first day and extending the lead significantly on the second.  While the Ginger 1200s took most of the final day's matches, the deficit was simply too large to overcome, and Macho Rod would end the day dousing himself in beer from the Marquee de Sod at the end of the dock adjacent to the accommodations that hosted Men.

Title IX also brought back Sausagefest on the request of long-time Alumni.  Sausages and burgers were expertly prepared and enjoyed by all.  The Feast of Man the following day would see massive steaks served up to many hungry Men.  The Weekend of Man is and will always be an a-political organization, however dinner would be followed by a drinking game played during one of the first Republican Presidental Debates.  Every time the phrase "secure our borders" was uttered, you had to drink.  It became an evening of semi-extreme inebriation for some.

Day two of Title IX would see most men play golf at Fortune Bay on the only poor weather day.  Light rain eventually gave way to cloudy skies, but temps remained lower than normal.  After the golf finished, the skies cleared and temps rose, just in time to see Men hit the waters to catch fish.

The Bobocracy and Sam Adequate made a journey all the way to the far end of the lake, something other Men had never done.  There was nothing of note on the far end, and they would soon retreat back to "The Honey Hole" where they found success by landing a few walleye.  Sam Adequate would later throw a fish back in the water while trying to remove it from Undrafted Jeff's hook.  Bruce-in-Law and Good Times Johnny fished from the other boat, and would connect with Cinnamon!, The Bobocracy, and Undrafted Jeff later that afternoon.  An odd noise started to originate from the far side of the lake and within seconds, the five of them would end up under a torrential downpour.  The fish that were caught were later prepared using a batter of crushed crackers, proving that necessity truly is the mother of invention.

Expanding on activities beyond golfing, fishing, and sailing, Alumni Citizen Dique chaired the Select Committee for Auxiliary Recreation (SCAR).  The SCAR committee would see several Men head to the shores of Lake Vermlion and go on a tour of the Soudan underground mine.  Rookie Man Hysterectomy Tom would help Men set a Guiness World Record with the Deepest Underground Consumption of Domestic Beer from a Yeti Colster at a depth of 2341 feet below the surface and 689 feet below sea level.  This record, while certainly assured, still awaits verification from Guiness.

In addition, SCAR also saw Alumni "Mark" bring two jet skis to The Weekend of Man, where he and Kahnke Kong would approach 70 miles per hour on the water.  Video of this accomplishment was captured, however to-date nobody has been able to find the SD card that contains the footage.  The search continues.

Introduced to The Weekend of Man in 2015 was drone technology.  Macho Rod and Cinnamon! managed to capture some fantastic flying footage, however it was cut short due to RF interference with the camera and the drone, causing a crash and broken blades.  It should be repaired in plenty of time for the next Weekend of Man.

Title IX also saw Men take a joke by comedian John Mulaney about The Salt & Pepper Diner and Tom Jones to its penultimate conclusion.  On the third day of The Weekend of Man, What's New Pussycat would be played consecutively a whopping 34 times.  Bruce-in-Law only laughed after the 31st playing while pumping fuel at a local gas station.