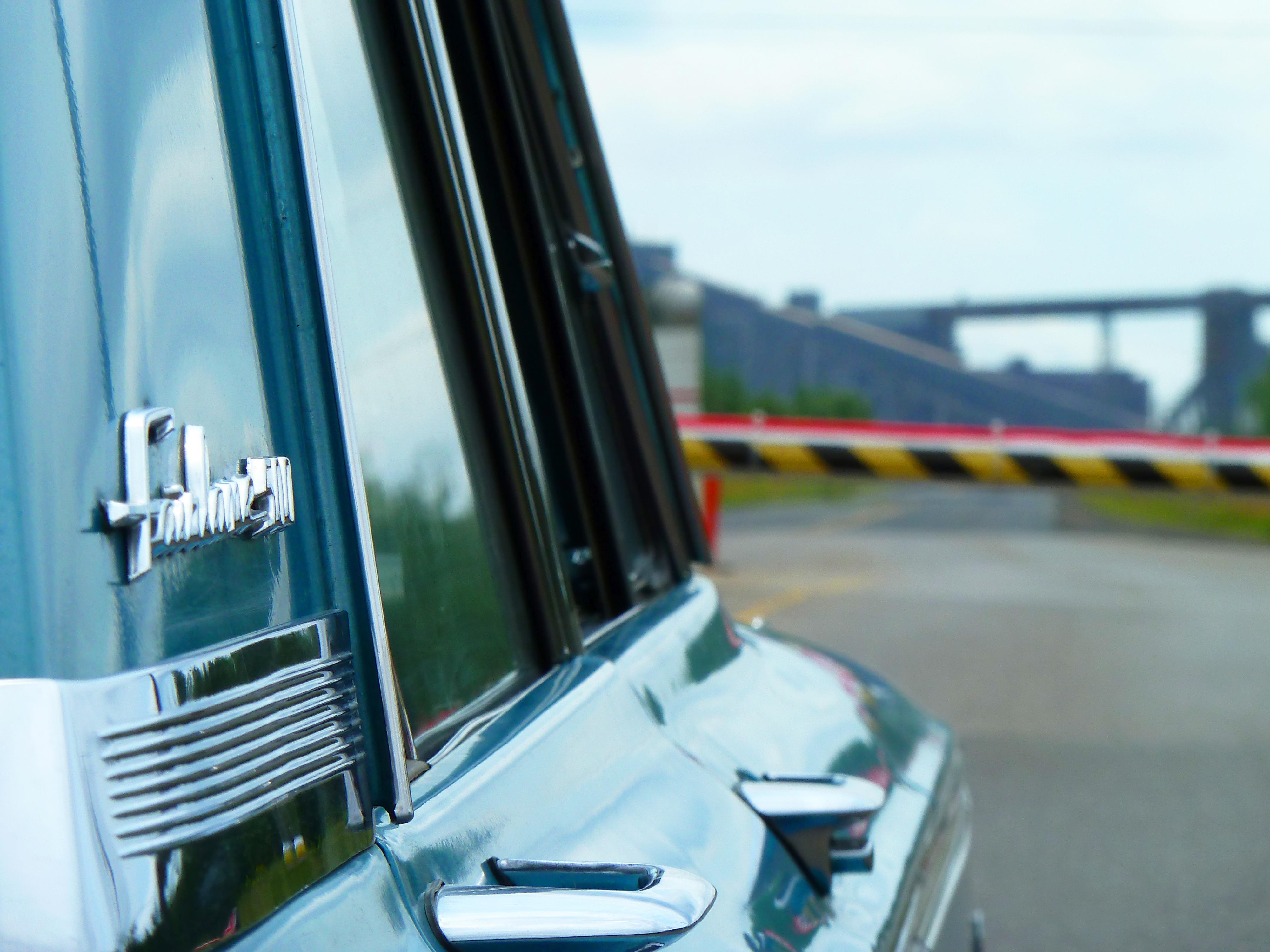 2012, in what may be a first, began on an idyllic Minnesota summer day.  The day before the official beginning of The Weekend of Man SIX, Undrafted Jeff rendezvoused with The Bobocracy and they began the epic journey north in Undrafted Jeff's 1963 Ford Fairlane.  First stop:  The Fairlane Taconite Plant, where the iron that made that very Fairlane was processed.  Three hours, two bags of beef jerky, and countless diet cokes after they departed, the Fairlane was reunited with its birthplace.

After a short stop the journey continued where soon after pulling into Giants Ridge, the first of many liquor store runs commenced.  What is now early arrival-specific Brotocol, they purchased a case of Blats Light and a case of the Cheapest beer available, Boxer.  After paying a modest amount of money for a substantial amount of questionable beer, Undrafted Jeff and The Bobocracy successfully negotiated the acquisition of a life-sized posterboard featuring a Coors Light cheerleader.  The Weekend of Man 2012 started on the right note.

Moments after returning to Giants Ridge, Undrafted Jeff and The Bobocracy were met by other early arriving men, namely Master Baiter Jason, Kent 45 the Six Shitter, Cinnamon!, Nerd, Sporadic Jack, and Scottish Rob.  They enjoyed cigars and the ceremonial Smoking of the Pipes, with Cinnamon! respecting The Rule of the Viking this year.  After an evening's rest, Weekend of Man SIX would officially begin.

Early the next morning, bait was retrieved from the nearest local convenience store and fishing launched expeditiously.  In the first three minutes, Undrafted Jeff pulled in what would be the weekend's largest walleye, measuring slightly over 19 inches.  Several fish that morning were caught, except for one that got away in what will surely become and endless argument over whether The Bobocracy failed to keep the rod tip up, or Undrafted Jeff is a horrible net man.  The fish that were actually boated were expertly butchered by Kent 45 the Six Shitter.

The day turned out to be a repeat of the day before, with a sun-soaked sky greeting the rest of the arriving Men and the begining of the Ironhead Cup's first round.  The Quarry proved difficult that day, with the Lake Team captained by Cinnamon! and the Itasca Team captained by Citizen Dique ending the day tied, squaring one of the three matches and each winning the other.  After the golf, Men were served unlimited walleye on the deck of The Quarry clubhouse, nourishing them appropriately for the many days to come.

The next morning and a trip to Fortune Bay kicked off round two of the Ironhead Cup.  The first match was a blowout, with Team Itasca whipping Team Lake 4 and 3.  The second match was a nail-biter, with Team Itasca leading most of the way, until a spectacular par by Good Times Johnny on the 15th hole brought the match All Square.  The Bobocracy brought Team Lake one up with a great par on the 16th and Good Times Johnny iced the match with a closing par on a very difficult 18th hole, taking the Ironhead Cup into the final day completely tied up.

That evening involved more fishing as well as the Feast of Man.  Good Times Johnny expertly cooked steaks that fed even the hungriest of Men, however the real feature was Lake Superior Brewing.  This year they brought an unreleased Black IPA, which based on the feedback of all Men present, is soon to become a full rotation beer for Lake Superior Brewing.  It was revered with the highest of honors.

Saturday on the Iron Range and the final day of the Ironhead Cup started rough, with temperatures dropping and overcast skies.  A mix-up with Giants Ridge meant no breakfast for Men, making the round even more challenging.  Despite all that, the round was filled with amazing shots and close matches, bringing the Ironhead Cup down to the final shot. Heading in to the final hole with a 1 up lead, Cinnamon! and Undrafted Jeff both bogeyed the hole, ending the match All Square and giving Team Itasca a 1/2 point win over Team Lake.

Men did more fishing.  After hours of badgering, Master Baiter Jason was allowed to drive Kent 45 the Six Shitter's boat.  Within 10 seconds he drove it straight into a dock.  Master Baiter Jason is permanently banned from operating Weekend of Man watercraft.  That evening a group of Men relaxed in their cabins and enjoyed a fish fry of the weekend's catch, while another more brave group performed the Virginia Death March.

The cabin Men wrote a song about it.  Wanna hear it? Here it goes...

Forced down Boxer beer with walleyeeeeeee
Cardboard hooker in the dumpsterrrrrrrrr

Aaaahhhhhhh!!!!! Thank you very much!

The Virginia Death March is walking from one end of the main street in downtown Virginia to the other, stopping at every bar in between.  While the evening's story was shared in great detail, only highlights are appropriate for a broad audience:

The Death March Men wrote a song about it.  Wanna hear it?  Here it goes...

I was bar hopping with boys in the iron range
and big Eskimo with a big furry hat tried to shank me...

Aaaaaahhhhhhh. Thank you very much!

The next morning, some Men headed back home while others played a final round of golf, then found their ways back to civilization, bidding a farewell to Weekend of Man SIX.  For some however, the adventure was just beginning.

Returning to the Twin Cities, Undrafted Jeff and The Bobocracy got caught in horrible construction traffic and chose to detour around the interstate on a local country road.  About 10 minutes after leaving the safety of the well-patroled Eisenhower Freeway System, both noticed that something was amiss.  There were no houses, no other traffic, and the world was eerily silent.  After a very short conversation, Undrafted Jeff and The Bobocracy became convinced that should the 50 year old car they were in break down, they would be murdered, or at the very least raped.  They coined MN Highway 27 "Rape Road."  About 20 minutes into their voyage, The Bobocracy pointed out a burned out trailer home to Undrafted Jeff saying "Hey Jeff, did you see that burned out trailer home?"  Jeff responded in the negative to which The Bobocracy replied "That's OK, we'll probably see the inside of it later when we're gagged up."  Nothing was said after that until the turned off the highway 15 minutes later.  They arrived safely, but will carry mental scars for some time.

Research months later would indicate that shortly outside of where their detour began, directly on MN Highway 27, is the Minnesota prison that houses sexual offenders.


Somebody knocked my dick in the dirt.