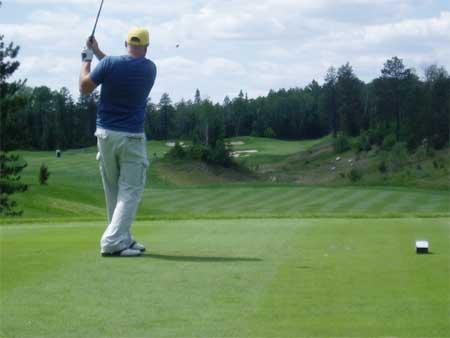 "You guys are nuts." the starter proclaimed. Visibility was no greater than a few hundred yards. The rain was steady and thick and the temperatures were low. While still barely visible, the drive off the first tee found the center of the fairway after a thunderous strike sent it on its way. The first tee was now in the past. With the forecast only deteriorating and the temperature in no mood to rise, thirty-five more holes that day remained.

The Weekend of Man began on a wet and rainy day more than a decade ago in Brainerd, Minnesota. A package deal with unbelievable lodging, combined with stories of amazing golf courses was enough to convince The Bobocracy and Mysterious Nick to drive North. 36 holes were played the first day in some of the most brutal conditions seen by Man. Struggling through to the next day, the skies gave way to an amazing Spring day in Northern Minnesota, ending this first Weekend of Man on the proper note. It was then declared that the search for spectacular golf and lodging on the last weekend of Spring rates started.

The next few years were much a repeat of the first, returning to the Brainerd area each year attempting to find a better deal and a better golf course. Each resort was tested. Grand View. Craguns. Maddens. Ruttgers. One even modified their lodging policies as a direct result of the abuse of massive accommodations just to hold The Bobocracy and Mysterious Nick. They still returned, enjoying it each time.

Mysterious Nick ended up moving and the commitments of school and work kept him away from a still-unbranded Weekend of Man. The Bobocracy was left to his own devices, managing to keep tradition alive the next year by driving North for one round of golf and returning to the Minneapolis/St. Paul Metro Area on the same day. It wasn't the original. Four and one half hours of golf was bookended by five hours of driving.

A year after the solo trip to Brainerd, The Bobocracy received an invite from some friends to drive even further North and into the heart of Minnesota's Iron Range to play Giants Ridge, a course shrouded in secrecy by those in the know. Rumors however had circulated that would declare this the best Minnesota had to offer, and from the rumors The Bobocracy accepted and began the trek North in the early morning hours.

By the time the day ended, it was so decided that Brainerd was no longer suitable, as Giants Ridge was superior in almost every way. With the opening of two new and equally as good if not better courses in the next few years, the annual return continued, sometimes by The Bobocracy alone, sometimes with another. But tradition remained.


Four person is NOT four man.